According to 'The Paperless Airplane',

"Completion of the Shady Grove Access Bike Path was celebrated by officials, bikers and walkers, alike, because it means there is a safe pathway to the Shady Grove Metro Station for bicyclists and pedestrians and a connection to other area sidewalks and bikeways."


Apparently, getting to the Shady Grove station was 'unsafe' before, though I've never read of a cyclist getting hit there. Also, apparently I'm 'celebrating' right now, though since I know that such facilities are unsafe, I'm actually quite concerned that the new cycling facility will cause more accidents.

Cyclists should be aware that the American Association of State Highway and Transportation Officials (AASHTO) ‘Guide for the development of bicycle facilities’... cautions against building two-way paths along, but physically separated from, a parallel road. AASHTO states that sidewalk bikeways are unsafe and implies the same about shared-use paths parallel to roads, listing numerous safety concerns and permitting their use only in special situations.

I'm not sure how bike tracks like this continue to be installed when everyone who's involved in the process ought to be well aware of the AASHTO guidelines. But they do keep popping up, and cyclists who should know better do keep using them rather than avoiding them like the plague, which is what I do.

Cyclists are usually safer taking a central position in the general traffic lane in situations like these, as is recommended by the Maryland state Driver's Manual (see page 30), which states,

"Bicyclists may ride out in the travel lane for their own safety due to narrow roads, or to avoid obstacles or pavement hazards. On roads without shoulders, or with cars parked along the right side, often the safest place for a bicyclist to ride is in the center of the lane. In Maryland, a bicyclist may use the full lane even while traveling substantially below the speed of traffic if the lane is too narrow for a car to safely pass a bicycle within the lane)."


The roads around Shady Grove all have two or more lanes in each direction - motorists can easily change lanes to overtake. Or, if there isn't enough room to overtake, they can wait behind the cyclist, as they are required to do by law.

If the problem is that cyclists from Gaithersburg have no access except for the quasi-freeway that is N. Frederick Road, then what's needed is a ROAD, with a 20-25mph speed limit and connected at each end with a standard intersection. We do not need a bike path with fricken pedestrian crossings at each end. A bike is a vehicle, not a toy.

Alternatively, and admittedly this idea might be shocking and appalling to some, but what if we reduced the speed limit on N. Frederick Road, say to 25 to 30mph, so that people don't use it as a raceway and so that all users can feel safe on it.

Posted by Ian Brett Cooper at 17:15 No comments: 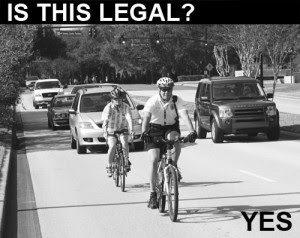 Brilliant stuff! I wish all police officers knew all of this and kept it in mind during their patrols.

Here's another bulletin by a Florida police officer who understands the reality of what's safe and legal for cyclists:

A Department Bulletin to Help Officers Understand Cyclist Safety and Lane Use
Posted by Ian Brett Cooper at 01:17 8 comments: