Fear and Loathing on the Bike Path 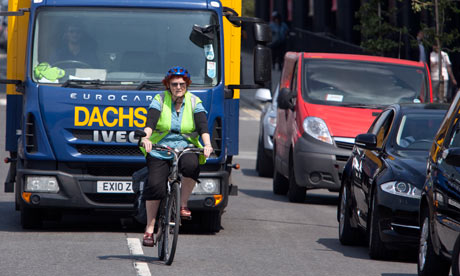 I've seen it argued many times on many blogs that people feel excluded from cycling. That if only we could have a vast network of segregated facilities, people would turn up in droves to cycle on them.

The thing is, as far as I can see, it just ain't so. The real problem is that the vast majority of people simply do not want to cycle. Sure, people often say "If it was safe, I'd cycle", but the fact is, it is safe (at least as safe as driving and possibly up to twice as safe, according to stats I've seen) and people still don't cycle.

The fact is, motorized transport is too convenient and people are too lazy.

But even if they weren't too lazy, the fundamental problem with populist infrastructure advocacy (segregation) is that its devotees promote infrastructure by supporting the very fear of traffic that the non-cyclists use as an excuse. It would be all well and good to say "We need infrastructure because roads are scary" IF a complete network of good quality fully segregated cycling infrastructure already existed, but the harsh truth is that it DOESN'T exist, nor will it ever exist. Whether the segregationists like it or not, most cycling has to be done on the road with traffic, and while that's the case, supporting fear can only result in more people being unwilling to cycle.

So I think that if segregationists truly want to see a significant rise in cycling mode share anytime soon, they need to get beyond using fear as a tool to get their way, so that the lazy masses have no more excuses.

But even if we got beyond the fearmongering, there's another big problem, and that is that populist cycling advocacy has no problem with poor facilities. The general attitude is "Yeah, it's not great, but it's better than nothing". But no, it isn't. Facilities like this dangerously narrow two-way bike lane: 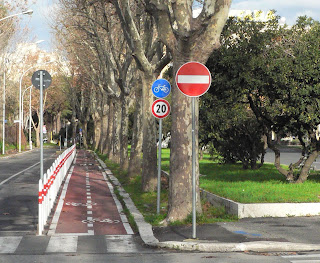 ...or this incorrectly striped bike lane: ...or this bike track which Streetsblog says "attracts 2.5 times as many cyclists as comparable streets with no bike lane" but which encourages wrong-way cycling and keeps cyclists dangerously removed from motorists' sight until they reach an intersection:

...or even this door zone bike lane, which Streetsblog.org lauded as an example of "Baltimore Getting Serious About Bikes":

...these are not better than nothing. The fact is, they end up injuring and killing cyclists with greater frequency than roads that are not 'bicycle friendly', as a recent study of bicycle facilities in Washington DC found, but glossed over.

The segregationists need to have at least some standards so they can draw some line between good and bad facilities. But right now, I don't see any criticism of anything - the general attitude is that if it's laid down for the exclusive use of cyclists, it's good, no matter how dangerous or useless it is, and God help anyone who criticizes it. This is play advocacy, because anything goes and there are no controls to make sure that what's being supported has real merit. The play-advocate gets to go to meetings, petition government, yell at and generally express loathing for opponents who do have standards, and declare victory for anything that gets done. The difference between play advocacy and real advocacy is standards, and in practice, populist bicycle advocacy has none.

We need mature advocacy, not play advocacy, so that people can't use the tired old excuses to avoid cycling. If we can get real advocacy, we can remove the barriers between people and bikes. Maybe then, people will start cycling in droves. Heck, maybe then, the facilities that the segregationists support will no longer be a joke, and even someone like me will be able to support them.

Posted by Ian Brett Cooper at 14:37 10 comments: Links to this post

Wishing for Spring - another weather rant. This time with more groundhog!

I'm officially done with winter. All these low-30s mornings are now beginning to piss me right off. I mean, this is suburban DC - shouldn't it be warmer already? Six weeks ago, that lying rat Punxsutawney Phil predicted an early spring, yet here we are with a couple of days of winter to go, and I have yet to see a day where I haven't needed to bike in layers of wool.

Of course, Phil has a record that is spotty at best. According to Stormfax.com, Punxsutawney Phil has only been correct approximately 39% of the time. So I say we take him out of whatever hole he's crawled into, put him up against a wall, and shoot him South American revolution style.
Posted by Ian Brett Cooper at 09:05 No comments: Links to this post

Last Tuesday, the weather forecast for Silver Spring on Wednesday was for up to 10 inches of snow. Yet I looked on Weather.com and while they were confidently predicting this childishly-named 'snowquester' or the more serious-sounding (though still somewhat inane) 'Winter Storm Saturn', I looked at the forecast temperatures, all of which were well above freezing, and concluded that it would never get cold enough for the snow to settle. So, at least in my brain, something didn't add up.

But Wednesday morning rolls around and my daughter's school is closed and NPR (where my wife works) told non-essential personnel to stay home. The weather services were still telling us to prepare for a 'snowmageddon'.

In the end, it snowed like crazy, but only enough to deposit about a half inch of very wet snow that melted almost immediately. The roads remained snow-free throughout with no need for salt or sand. It was a non-event. I guess I can't really complain, because although I missed my daily 7 mile cycle commute, the family got a day off. I just wish the weather services would use a bit of common sense. If it's not cold enough for snow to settle, it's probably not going to dump 10 inches of snow. One would think the weather services' computers would have been programmed to figure this out. It's not rocket science.
Posted by Ian Brett Cooper at 12:50 2 comments: Links to this post