Staying Comfy in a Post-Peak World

With oil prices ten times what they were a decade ago, and with all energy prices set to soar even higher (if not in actual dollar terms, then at least in terms of our ability to pay) over the coming years, I've recently being trying to change my mode of thinking about comfort as it applies to heating and air conditioning.

Since the age of fossil fuels began, it's been ever more ridiculously cheap and easy to keep warm and cool without doing it with clothing - so we've become lazy - we wear shorts and T-shirt indoors and in the car, because why wear bulky sweaters and coats when you can keep your house and car perfectly (and cheaply) air conditioned?

The only problem is it's incredibly wasteful to be heating and cooling 50,000+ cubic feet of home and driving around 2 tons of air-conditioned car to ensure that a mere 3 cubic feet of human being stays comfy. After the current shale oil bubble bursts (which it must), and with the coming age of energy insecurity, such luxuries are going to seem more and more unreasonable, and the more we try to deny and ignore the coming changes, the harder and more expensive it will be to adapt to the coming reality.

So I've decided to make some efforts towards personalizing my comfort (and conserving energy) rather than socializing it (and wasting energy). As a cyclist, I'd already done this when it comes to my commute - and I already don't drive, so no wasteful spending there. I just have to start doing it at home. This winter I took to keeping the heating a lot lower and wearing a sweater indoors - not a huge change, but it did reduce energy use (and our monthly bills). This summer I'm going to see if I can install some ceiling fans to recirculate cooler air rather than losing it through the ceilings. I'm also going to make some efforts to add insulation so that whatever desirable heat and cool there is in the house stays here. Baby steps - get the low-hanging fruit first.

Maybe next year I'll look into cheap ways of implementing passive solar and doing some strategic plantings around the house to help keep the house warmer in winter and nicely shaded in summer. There's lots that can be done without spending tens of thousands on the rooftop solar and passive radiant heat slabs that are en vogue with the Jet Set environmental crowd right now. Heck, if I were a millionaire, I'd be able to spend $100 grand and ensure I didn't need to pay another bill for heating and air conditioning in my life, but I'm not, so I have to do what I can with what I've got.

Posted by Ian Brett Cooper at 17:11 No comments:

Thanks to All This Effort, Utopia is Just Around the Corner! Or not. If it were real, that ad would be looking pretty tempting right now, because the future's looking none too bright.

Yeah, I guess it's that time of the year again - a period (for me) of vague disappointment that lasts from the ides of April through the ides of May. Time for all the world's hypocrites to celebrate their engagement in two 24 hour periods where they say a big 'Fuck you!' to anyone who makes more of an effort to be kind to the planet. The first in this 'axis of hypocrisy' is Earth Day, where they spend 1/365th of their year in a gargantuan pseudo-effort to save the planet (will that be enough this year - or any year? I doubt it). Next month comes Bike to Work Day, when many of these same arrant hypocrites try REALLY HARD to reduce their dependence on foreign oil by 1/365th, to reduce pollution by 1/365th, to reduce traffic congestion by 1/365th, to become 1/365th fitter, etc., etc.

Maybe this year the 1/365th effort will pay off and we'll achieve some kind of environmental event horizon, where all this far-less-than-half-assed effort finally pays off and we emerge into a new utopian dawn.

On the other hand (and more realistically), maybe not. This is what the aftermath of last year's Earth Day looked like in Fort Mason Park in San Francisco:

On the bright side, at least I spent the weekend in good company (my wife and kid). Yesterday we watched last year's classic time travel movie Safety Not Guaranteed. Today, with the kid at a friend's house, I spent the afternoon in a Benadryl-induced stupor being driven around suburban MD in search of a home improvement store and berating my wife for trying to defend both Earth Day participants and lycra-clad cyclists. I have recently had the... oh let's call it 'opportunity'... to cycle-commute together with some folks who wear 'the lycra'. They're such nice people, which makes it hard to ask them if they really must wear that get-up on our commute. I've considered starting out with them and slowly letting them get far ahead and sneaking onto an alternate route. I'm not sure if the embarrassment of cycling with people who choose to camouflage themselves as bumblebees is overwhelmed by the pleasure I take in ridiculing their attire when my wife gets home. I'm thinking it does. And the kid enjoys it, which counts for a lot (and she seems able to overlook the fact that her new commuter-mates are oversized members of the bee genus Bombus).

So life has elements of humor, and things could be far worse. It would be nice though, if the kid had a bit better than a 1/365th chance of inheriting a better world. But the vast majority of people don't even try that hard, so let's face it - she doesn't stand much chance at all.

So, to paraphrase the main character Darius from the aforementioned time travel movie: "How do we eject?"
Posted by Ian Brett Cooper at 21:29 4 comments: 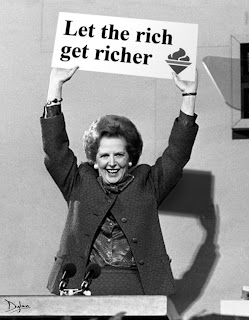 Ding Dong! The Witch is dead.

For those of us working class Britons who had to endure years of class warfare, Thatcher was no hero. I was 9 years old when I got my first taste of Thatcherism, when free school milk for the over sevens was removed in 1971. Edward Short, Labour education spokesman said it was ‘the meanest and most unworthy thing’ he had seen in 20 years.

It got worse from there. Thatcher sold off public businesses, destroyed trade unions and eroded workers' rights, slashed public services and tried to destroy the National Health Service, increased the gap between rich and poor and installed the basis for today's right wing political philosophy of "I, me, mine".

In my view, her policies destroyed Britain. I left in 1984, partially because Thatcher's England was no longer the England of my dreams.

Britain finally had enough when, in 1990, Thatcher instituted the Community Charge or 'poll tax': a tax which took no account of ability to pay. The resulting unrest forced Thatcher to resign as Prime Minister in November, defending a tax which an opinion poll had found only 12% favored.

Apparently, even in death she's still sticking it to the working class - she's getting a ceremonial funeral with military honors paid for with working folks' taxes.

No tears will be shed on this site over her demise. I just wish her policies would have died with her, but Britain is stuck with them.

Still, I should be thankful for small mercies. So party tonight at my house. Everyone's invited. The (English) Beat, Elvis Costello, Chumbawamba, Morrissey, The Exploited, Billy Bragg, and many, many more are on the jukebox and I aim to get legless.


My family comes from the area around Aughton, Treeton and Orgreave, villages outside of Sheffield.


When the Guardian stopped to ask a local man if this was Orgreave, he said simply: "It's supposed to be." It's not just the pits which have gone, said Mansell, who worked underground at the Treeton colliery for 22 years. But with it the "camaraderie, the community spirit – the sense that we were all looking out for each other." He believes Thatcher didn't just destroy his village and many others like it, but also paved the way for the political climate of today.


Hell has now frozen over, because by now, Thatcher will have closed down the furnaces.

11 April Update: Russell Brand puts it nicely in an article in The Guardian today:


When all the public amenities were flogged, the adverts made it seem to my childish eyes fun and positive, jaunty slogans and affable British stereotypes jostling about in villages, selling people companies that they'd already paid for through tax. I just now watched the British Gas one again. It's like a whimsical live-action episode of Postman Pat where his cat is craftily carved up and sold back to him...

All of us that grew up under Thatcher were taught that it is good to be selfish, that other people's pain is not your problem, that pain is in fact a weakness and suffering is deserved and shameful. Perhaps there is resentment because the clemency and respect that are being mawkishly displayed now by some and haughtily demanded of the rest of us at the impending, solemn ceremonial funeral, are values that her government and policies sought to annihilate.

I do recall that even to a child her demeanour and every discernible action seemed to be to the detriment of our national spirit and identity. Her refusal to stand against apartheid, her civil war against the unions, her aggression towards our neighbours in Ireland and a taxation system that was devised in the dark ages, the bombing of a retreating ship – it's just not British.

Posted by Ian Brett Cooper at 14:49 No comments: